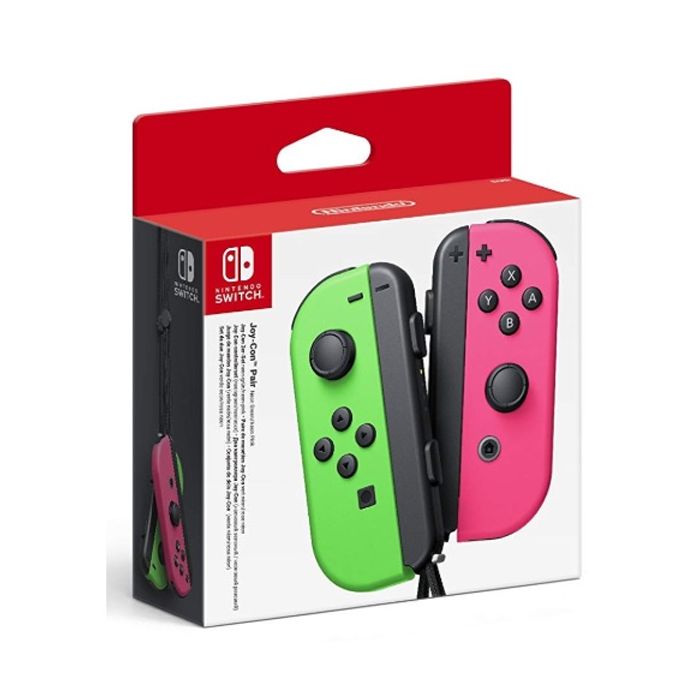 Introducing Joy-Con, Controllers that make new kinds of gaming possible, for use with the Nintendo Switch system. The versatile Joy-Con offer multiple surprising new ways for players to have fun. Two Joy-Con can be used independently in each hand, or together as One game Controller when attached to the Joy-Con grip. They can also attach to the main Console for use in handheld mode, or be shared with friends to enjoy two-player action in supported games. Each Joy-Con has a full set of buttons and can act as a standalone Controller, and each Includes an accelerometer and gyro-sensor, making independent left and right motion control possible. Includes 1 left Joy-Con, 1 right Joy-Con, and 2 Black Joy-Con wrist strap accessories.

The Nintendo Switch is an especially colorful system thanks to the variety of different-colored Joy-Con controllers, and now those that have been looking for a new set of colors to go along with their system can find the Splatoon 2-themed pair heading to stores in a few weeks.

Nintendo of America announced that the neon pink and green Joy-Con controllers will be arriving in stores later in January, giving a fresh new look for Nintendo Switch owners this winter.

These Joy-Con controllers were originally available exclusively as part of the Nintendo Switch’s Splatoon 2 bundle that debuted back in September, while other regions (such as Japan and Europe) were able to purchase the standalone controllers for quite some time.

However, the new release of the controllers will bring the green and pink controllers to US stores as a standalone package, and offers a nice break from the assortment of grey, red, blue, and yellow Joy-Con controllers that are currently available in US stores.